Get Free Artex Removal Quotes & Save up to 37% now

Get 4 quotes from local artex specialists & read their reviews 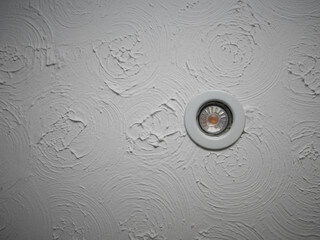 For those of you who don’t know, Artex is a textured surface coating usually applied to ceilings. The tradesman gives the slurry a repeating patterned texture using different shaped combs.

In the 1960s and 1970s, Artex covered many new build ceilings as it didn’t require plastering skills. So, painters and decorators usually applied the slurry or used Artex paint. Up until the mid–1980s, Artex contained asbestos as a strengthener. However, builders stopped using asbestos after 2000.

You can tell the difference between an Artex and plaster ceiling by scraping a little bit of the dried coating. Underneath the paint, an orangery brown or grey colour indicates plaster whereas white indicates Artex.

The cost of Artex removal will vary depending on various factors. These include, type, age and thickness of Artex as well as how widespread the ceiling covering is within the house. Typically, to remove an Artex ceiling of 20m2 will be about £2000 (about £100 per m2). On top of this, you’ll have to dispose of it using a regulated asbestos waste site. To be honest, there are cheaper options, which we’ll talk about later. But, only choose these after taking professional advice.

Homeowners might want to remove Artex for the following reasons:

How do you know if Artex contains asbestos?

If you had your house Artexed before 1985 you almost certainly have asbestos in it. If done between 1985 and 2000, it may or may not have asbestos as there were still many thousands of Artex bags stored in warehouses continuing to be sold.  Unfortunately, you can’t tell if asbestos is present just by looking. It has to be professionally analysed in a laboratory. This is why the asbestos survey is so important.

How To Remove Artex From Ceilings & Walls

Remember that if you’re going to produce dust during the removal process, you need to have air-testing equipment set up to measure how many asbestos particles were released into the air. Needless to say, only a qualified professional contractor can remove asbestos. There are asbestos awareness courses available for anyone who needs to know how to handle the mineral.

There are three ways to remove Artex from a surface:

That includes plasterboard as well as Artex. So, all that’s left will be ceiling joists. The plasterboard and Artex will have to be disposed of as hazardous asbestos waste to a registered waste site. This isn’t a DIY project!

Use a chemical gel to dissolve the Artex. X-Tex is a water–based gel that softens textured coatings such as Artex. About 2.5L of X-Tex will be enough to treat about 5 to 7 m2 depending on the thickness of the Artex.  After applying the chemical you can scrape the gel from the plasterboard, leaving the ceiling intact. If you use X-Tex, you’ll keep the Artex wet at all times so there will be less chance of floating fibres in the room. The gel keeps the dissolved Artex and asbestos stable. But you should continue to treat it as hazardous asbestos waste and take to a registered waste site. This method is suitable for DIY.

Hire a wallpaper removing steamer and use this to loosen the Artex. Then, use a long–handled blade scraper to peel away the surface. One word of warning, however, don’t leave the steamer in one place for too long, otherwise, the Artex will liquefy and it’ll run everywhere. Also, you might damage the plasterboard surface, so take care and everything will be okay. Although slow, it’s suitable for DIY.

Can you plaster over Artex?

Having said that you can remove the Artex, probably covering the Artex with plaster is the most popular and cheapest method of dealing with it. Before you do this, have an asbestos survey done first to check that your Artex isn’t damaged and that covering with plaster will work.

Using a paint scraper, knock off any large lumps of Artex to produce a more uniform surface.

Apply at least two coats of PVA solution to seal the surface and give the plaster a key on which to bond. However, if your Artex is very absorbent, use a third coat.

Before the final PVA coat dries completely, apply the first coat of plaster. Next, flatten and smooth as it starts to dry.

When the first coat starts firming up, start applying the second coat. Use a trowel to flatten and smooth as this coat dries.

Plastering is a very skilled job, so leave it to the professionals. Especially as you’re dealing with Artex containing asbestos.

Although plastering over the Artex ceiling will seal the asbestos inside, don’t forget to pass on this information to future house buyers. Then, they won’t disturb the ceiling and put themselves at risk.

How To Cover Artex Walls Without Plastering

Hanging wallpaper is a job suitable for a DIY project. However, as you’re laying paper onto textured Artex, you’ll have more trouble sticking the paper to the surface. You’ll still have to seal the Artex with PVA to keep it stable, remove any large lumps and fill any holes. But, if you carefully hang the lining paper and wallpaper, you’ll end up with a good finish.

Decorators charge between £100 and £150 per day for laying wallpaper onto a ceiling. But of course, an extra layer of lining paper will increase the time taken. And, the final amount will depend on the size of the ceiling and its preparation.

Once again, as you’re not removing the Artex, you need to pass on the information to whoever buys your house in the future. They need to know that there’s asbestos under the wallpaper so they don’t start drilling or cutting the plasterboard.

Back in the 1960s and 70s, building developers tried to build as many houses as they could in the shortest possible time. Unfortunately, there weren’t enough plasterers available to plaster ceilings as well as walls, and they wanted some way to reduce the amount of time spent on construction.  One of the shortcuts they came up with was to cover a plasterboard ceiling with Artex rather than plaster. The textured surface didn’t need the perfect smoothness of plaster, it dried slower so was easier to apply,  and was a relatively unskilled application compared to plastering. Many decorators started applying Artex, and decorators usually charged less than plasterers.

Back in the day, Artex contained asbestos fibres to strengthen the coating and prevent cracking. Fast forward to the 1980s. we discovered that asbestos caused severe respiratory problems, asbestosis and cancer. Manufacturers stopped using asbestos in Artex. Unfortunately, there were already many thousands of bags stored in warehouses and on builders merchant’s shelves so they continued selling side by side with the new formula. The UK government finally banned asbestos completely around 2000. By this time, house designers no longer used Artex as it was seen as unfashionable. Additionally, tradesmen had found that it was almost impossible to patch up damaged Artex and produce a seamless join. Slowly, Artex went out of fashion and plastering returned as the surface covering of choice.

These days it seems like people want to either remove all trace of Artex from their home or cover it up to hand over the responsibility to future generations.

Firstly, you don’t have to apply for planning permission to use or remove Artex. And, if you already have Artex in your home and it’s in good condition, then it’s quite safe to leave alone. However, if you want to drill into an Artex ceiling to fit light fittings or damage the coating in any way during refurbishment, the work then comes under the Control of Asbestos Regulations 2012.

This means you have to follow guidelines to notify the Health and Safety Executive (HSE). Your local authority can advise you whether the work is notifiable or not. And, if needed, point you in the direction of a suitably qualified asbestos surveyor who can do a risk assessment.

You’ll find that for domestic work, the enforcing authority is the HSE and you must inform them of your proposed work via an online notification form.

Is it safe to remove Artex?

Yes, as long as you use a method that keeps the Artex wet. This will prevent dry dust and fibres from becoming airborne. Two ways of wet removal include using X-Tex or a similar chemical gel, or by using a wallpaper steamer and scraper.

When was asbestos removed from Artex?

Artex stopped using asbestos about 1985. However, there were already many thousands of tonnes of Artex in warehouses and wholesalers stores. So it continued to be sold alongside the new formula until about 2000.

How dangerous is Artex?

As long as Artex isn’t present as powder or dust, or damaged in any way, it’s quite safe to leave in your home. To be absolutely certain whether you have asbestos in the Artex, you’ll need an asbestos survey done. You can’t tell just by looking.

How Long does Artex removal take?

That depends on the method you use. If you intend to completely knock the ceiling down, back to bare joists then it’ll probably take about half an hour or so. But, remember that this is the dirtiest method and will produce a lot of dust. You’ll probably have to hire a specialist company to do this work.

If you’re using a gel such as X-Tex, a small ceiling of about 4m2 should take only about half an hour. But, if there are multiple paint layers it will take much longer. A steamer is very slow compared to gel and once again depends on the thickness of Artex and how many paint layers there are.

How do you repair a cracked Artex ceiling?

Find out what caused the crack in the first place. It probably happened because of uneven movement at a plasterboard joint. So, strengthen and prevent any movement at the joint by adding stainless steel screws. Make sure the screw heads are below the surface level.

Ensure the surfaces are clean, dry and free from flaky material. Then use Artex Easifix Texture Repair Kit. Follow the manufacturer’s instructions for application depending on the existing texture. Once the repair dries, paint the entire area with a good quality emulsion to even up any variation in colour.

Can you sand or scrape off Artex?

Older Artex contains asbestos, so you must not, under any circumstances sand or scape dry Artex and risk causing dust. Seek advice from an asbestos specialist. You can ask your local council for help with this.

If you have modern Artex, have an asbestos survey done to prove that you haven’t any asbestos present. Once you’ve proved this, you can sand or scape. But, make sure you wear suitable PPE such as a dust mask and goggles.

Alternatively, you can keep the Artex wet by using X-Tex gel or a steamer to assist with removal. You won’t produce any dust and it should be safe enough. However, dispose of the Artex waste as you would hazardous waste. That is, take it to a registered hazardous waste disposal site. Your council will have information on where you can find one of these.

When dealing with asbestos, it’s always better to hire a qualified professional to deal with it. Complete the form at the top of the page and you’ll receive 2 or 3 quotes from Artex removal specialists near you.