Get Free Chimney Removal Quotes & Save up to 37% now

Get 4 quotes from local vetted roofers & read their reviews 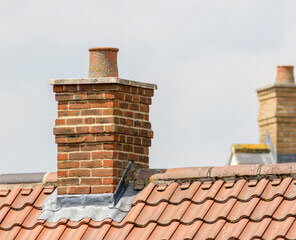 Why on earth would anyone want to remove their chimney? That’s a good question and deserves a good answer.

With the rise in coal prices compared to gas, and now we have more regard for keeping the air clean, more and more people are turning to gas central heating. This means that the part of the house that was at one time essential, the chimney, is now redundant and a waste of space.

Surely you can just leave it in place? Yes, you can, but as we’ll see later, a chimney needs a lot of regular maintenance, even if it‘s unused. And, of course, there’s the issue of using up valuable space in our homes that could be put to other purposes.

The average cost of a chimney removal job is estimated to be around £4,000, in addition to this, there may be smaller costs associated with both plastering and decorating which are needed for a nice finish.

Compare this to the cost of continuous maintenance over the life of the house, even if you don’t use the fireplace and you’ll see that the cost to remove is far less than keeping it.

However, remember that once it is removed, it’s very expensive to put back if you change your mind.

We’ve itemised each major job to show the individual quotation estimate you can expect:

Remember that prices will vary depending on the situation at your house. So, if you want to know accurately how much it is to remove a chimney breast it’s best to ask a local company for a quotation. Also, you’ll find that prices vary around the country. If you live in London or the South East of England you’ll find that costs are higher than elsewhere.

When you want a chimney removed, it isn’t a simple job of knocking the old one down and patching up the holes. Often, a chimney is an integral part of the house so there may be a lot of structural work involved, and repairing surface finishes afterwards.

A chimney consists of many constituent parts as described in the table above. We must understand that the chimney goes from the ground floor, through each floor including the loft before emerging through the roof. When we remove the chimney, it will leave a hole in the ceiling and floor of each room and a large hole in the roof. You might live in a semi–detached or a terraced house and the chimney might be shared with your neighbour. If this is the case, a simple job might turn into one with a high chimney breast removal cost. In this case, removing the entire chimney might not be feasible at all. You might have to leave the chimney stack in place or suffer an astronomical chimney stack removal cost.

Before knocking out your chimney breast, you’ll have to support the weight of the remaining parts. You usually do this in the loft space and use rolled steel gallows brackets. Remember you’ll only need gallows brackets if you intend to do a partial chimney removal. Likewise, other jobs only happen if you’re taking out a chimney breast or removing a stack. It all depends on the project details.

The Parts of a Chimney Stack

Now we know why people might want to remove a chimney, we need to understand the chimney parts and problems that come with taking out a chimney breast. So, let’s spend some time describing the parts that make up ‘the chimney’.

Firstly, indoors we have the ‘chimney breast’. This is the bit that sticks out into the room and wastes all that space in the bedrooms. At the bottom of the chimney breast is the ‘hearth’, where you light fires, and the ‘flue’, though which the smoke disappears and leaves your house.

Outside, you have the ‘chimney stack’ which protrudes from the roof and sitting on top you’ll have a ‘chimney pot’. That’s the earthenware tube, through which the smoke exits the chimney.

Why Consider Removing Your Chimney Breast?

At some time in the house’s lifespan, all the constituent parts will need maintenance unless you get rid of the chimney completely.

You shouldn’t need planning permission for fitting, altering or replacing a chimney as this is considered permitted development so long as you comply with various requirements. So, contact your local authority before starting and get their advice on what is allowed in your area.

However, working on a chimney will need to comply with the UK Building Regulations. Which part you need to comply with will depend on what you are doing. In general, however, any work that affects an existing chimney or flue must comply with Approved Document J. In addition to this you need to comply with those regulations dealing with Structural Integrity (removing parts of the chimney might significantly affect the structural integrity of certain parts of your home), Damp Proofing (you might disturb the damp proof course at ground level and the weatherproofing at roof level), Fire Protection (1–hour fire protection needed on all repairs), Sound Proofing (rebuild walls, ceilings and floors to the same thickness and using same materials as before), Ventilation (Part F2 requires all rooms to have permanent ventilation of more than 8000mm2), and the Party Wall Act 1996 (if you share a wall with a neighbour you must ensure your plans don’t conflict with their rights).

The easiest way to show compliance is to have plans drawn and submit these to the local authority. Then hire a tradesman from the ‘Competent Person Scheme’. Doing this removes Building Control fees and allows the tradesman to sign off their own work rather than going through the Building Control Officer.

Do I need a structural engineer to remove a chimney breast?

Yes, chimney breasts form part of the structure of your house. Removal means you have to incorporate new supports where needed. The Building Control Officer will check your plans and calculations for a structural engineer’s input.

Do I need a party wall notice to remove a chimney breast?

If you share a wall with a neighbour, you need to comply with the Party Wall Act 1996. If you remove some of the bricks in the party wall, you must replace these so that the wall is as good as before. Under the regulations, you will also have to serve a Party Wall Notice on the adjoining owner, setting out what you intend. Speak to a solicitor and your local council about this.

How do you permanently close a chimney?

Block up the opening in the chimney breast with concrete blocks or stud work and plasterboard. Remember you must have airflow into the stack so fit a vent as you close the opening. Likewise, fit a bird and rain guard cowl on the chimney pot to allow free airflow. If you don’t fit a vent you’ll have damp problems.

How do you temporarily block a chimney?

To temporarily block a chimney use a chimney balloon. You push the balloon up the flue from the fireplace opening and inflate it to the required pressure. Always follow the manufacturer’s instructions when fitting the balloon.

As you need to have permanent ventilation in the room, it’s a good idea to have a 50mm plastic waste pipe allowing free airflow past the balloon.

Remember to remove the balloon when you want to use the chimney again.

Is a chimney breast structural?

A chimney breast supports its own weight from the ground floor right up to the chimney pot. So, you can’t remove a chimney breast without taking into account the rest of the chimney. Along the way, it will also probably have floor and ceiling joists attached, that need alternative methods of support otherwise the upstairs floors and ceilings will collapse. Always assume a chimney is structural until proven otherwise.

Removing a chimney in its entirety or even only a partial chimney removal is not a job for an amateur. Professional contractors, of various disciplines, will do the job properly, taking into account all the Building regulations that apply and the necessary structural work. You can find a building contractor using local sources, but make sure they are qualified and are part of the Competent Person Scheme’.

Doing this can be a real pain in the neck, especially if you don’t know where to start. Alternatively, fill out the form on this page outlining the relevant details and you will receive 3 or 4 quotes from builders local to your area that we have already checked and approved. Simple, isn’t it?