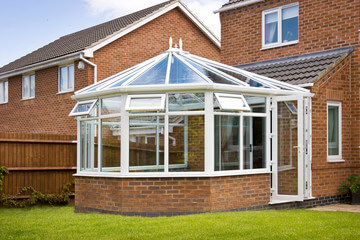 Warm spring or autumn days in the UK are great if you have a conservatory. It provides a snug place to sit out of the wind. However, during summer, sometimes with temperatures above 40⁰C, it’s unbearable and often dangerous without ventilation. Conversely, the conservatory gets too cold in winter. So, why not insulate the roof like other parts of your home?

The average cost of conservatory roof insulation is about £390/m2, depending on the material and size. In contrast, a new opaque roof costs around £805/m2, about double the price.

You could replace the conservatory roof with opaque insulating materials. And choosing lightweight materials rather than heavy ones won’t require strengthening the structure’s frame or foundations. Alternatively, place external reflective panels on the existing glazed roof. But, both methods still need internal insulation to reduce heat loss and prevent temperature extremes. Then, with a more hospitable conservatory, you can use it like any other room.

This guide discusses how much to pay for internal conservatory roof insulation, the factors affecting its cost, and answers questions asked by many householders considering conservatory insulation.

How Much to Install Conservatory Roof Insulation?*

The table below compares conservatory roof insulation costs against size and a traditional, solid roof. Every conservatory is unique so use the estimated data as a bench-line when researching your project.

*We compiled these estimated costs from various sources. Therefore, they may not be like-for-like. Furthermore, they depend on several factors we’ll discuss later. For accurate quotations, contact a conservatory insulation company. Alternatively, use the form on this page.

When budgeting the project, several factors affect conservatory insulation costs, which you must consider. About 80% of heat in an uninsulated conservatory goes through the roof. Therefore, winter months produce an icy room, while staying unbearably hot in the summer.

In this guide, we won’t deal with exterior conservatory insulation. However, it’s worthwhile considering insulation on the outside and inside surfaces simultaneously. Generally, we install conservatory roof insulation internally. But, external insulated panels can cover the glazing, thus providing additional protection and insulation and increasing the conservatory’s energy efficiency. However, exterior reflective aluminium panels are more expensive than interior foil or wadding.

The roof’s size determines the price of insulation. A large roof costs more than a small roof.

Using solar film to reduce the sun’s effect is the cheapest insulation method, with wadding and aluminium foil being the next affordable solution. Finally, the most expensive is a solid roof.

How much insulation you need depends on the room’s purpose. If it’s a child’s playroom, office space or living room in use all year round, it’ll need enough insulation to even out the temperatures. Furthermore, using solar film reduces UV damage to furniture.

Although conservatory insulation lasts for many years, it’s valuable to notice faulty insulation or damaged roof.

The main problems are condensation and cold surfaces. These favour mould growth, causing rot and dampness, reaching other parts of your home. It’s much cheaper to deal with condensation while still manageable, which means inspecting the insulation regularly.

The following are tell-tale signs that something’s wrong.

If you see condensation on the ceiling, it’s colder than the warm, moisture-laden air around it. Therefore, the insulation has failed. Typically, you might see a sheen or black mould growing on its surface.

Regularly inspect roof panels for cracks and movement, and repair them. It’s usual for panels and seals to deteriorate due to weather conditions, UV-light, insects, moss and mould. But, a minor crack admits rain, frost, and other extreme weather conditions that damage your conservatory’s structural components and insulation. If you notice a damaged roof, do some maintenance.

If the roof panels sag below the support framework, expect problems. Sagging leads to standing water, algae, and failed seals. These issues cause water damage to the insulation and ceiling, requiring complete replacement.

Check the glazing rebates for moss or mould. If present, there’s probably water leaking through the seal and into the insulation beneath.

How does your conservatory look?

With age, conservatories look old and weary. Is there condensation inside the roof panels or running down the windows? If so, the insulation isn’t working correctly. Perhaps it’s time to inspect the insulation and seals.

Let’s look at the insulation materials to know what’s available.

A glazed conservatory roof magnifies sunlight in the summer, especially from directly overhead. Also, the thin, conductive roof material allows heat to escape in the winter.

Typically, glass or polycarbonate conservatory roofs have a U-rating of 1.7, which is low energy efficiency. In contrast, a solid roof has a U-rating of 0.15, which is outstanding. Between these extremes, we have a typical roof insulation U-rating of 0.29.

There are three main ways to insulate a conservatory roof. However, the one to use depends on the conservatory’s design and purpose. Ask a professional’s advice.

This self-adhesive film sticks to the roof glazing’s underside. It costs £10/roll (45cmX200cm) to £273/roll (1.5mX10m). Different styles and qualities are available, so the price varies accordingly. Typical styles include: coloured, tinted, frosted, transparent or reflective. Using film, the roof retains its glazed appearance but reduces the sun’s intensity and heat build-up by up to 80%. However, the film primarily reduces glare and heat from sunlight. It doesn’t prevent heat transfer, so won’t make the room warmer in winter.

Thermal wadding and aluminium foil work well individually. But, together, they provide some of the best insulation available.

Aluminium foil is an excellent heat reflector. It’s easily installed and can be removed later if required.

Thermal wadding has air pockets to prevent heat transfer across its surfaces. Some types have a reflective surface to provide better thermal efficiency.

Either go for standard window or roof blinds to reduce sunlight. Or, use quilted reflective “concertina” blinds mounted on wires, operated using draw-cords. This method varies the light and heat allowed through.

Fixed insulation appears more sophisticated when hidden by uPVC cladding or insulated plasterboard with a skim coat of plaster. uPVC comes in various qualities and sizes but is cheaper than plaster, which gives the impression of permanence and suggests the room is an orangery.

Insulating your conservatory roof primarily improves its thermal efficiency. But, consider other benefits too. Here is a list of the most significant.

Roof insulation contains the heat accumulated inside the conservatory during the winter. And, prevents heat from outside entering the room during the summer. Therefore, insulation reduces your energy bills by boosting thermal efficiency.

Outside sounds reduce with insulation.

Affordable and cost-effective insulation keeps your conservatory warm in the winter and cool in the summer. Interior insulation is cheaper than exterior reflective panels or a solid tiled roof.

Conservatory insulation gives your family an extra room all year round. In summer, you reduce glare and avoid overheating for a better working environment and watching television or computer screens.

Temperature extremes affect electronic equipment like computers and televisions. So, an uninsulated conservatory used as a living room or office can severely damage your equipment. Generally, roof insulation transforms a space with limited use into a more flexible living and working area.

Insulating a conservatory roof takes far less time to complete than other methods used to solve these issues. Depending on the insulation method and finish, the time to insulate can be a few days to a couple of weeks.

If you keep plants in their conservatory, intense sunlight can hurt your plants at any time of the year. Insulating the roof reduces harsh sunlight, keeps a uniform temperature throughout the year, and costs less than converting the conservatory into an orangery.

Installing conservatory insulation takes place inside the roof rather than outside. However, fitting external reflective panels provide additional protection and improve the insulation.

Installing interior insulation is relatively simple for a professional. Therefore, we recommend hiring a qualified person to do this work. Also, you’ll get a warranty to cover problems in the future.

Depending on the size of the conservatory and the insulation choice, it’s unusual for the installation work to take longer than two weeks.

If you decide on skimming the plasterboard, expect this to take several days. Furthermore, if you intend to add exterior aluminium panels, add two or three days.

You probably won’t need planning permission for an insulated conservatory if you don’t alter its appearance or height. However, contact your local planning authority for confirmation before beginning the work.

Your conservatory already passed a Building Regulations inspection when it was initially built. Therefore, you won’t need another. However, suppose any alterations significantly increase the roof’s weight, such as installing a solid roof. Then, strengthen the conservatory’s structural frame and foundations. Get advice from the Building Control office and a structural engineer if you are in doubt.

Suppose the additional work needs further Building Regulations inspections. In that case, it’s easier to hire someone from the Competent Person Register, as they can self-certify their work for Building Regulations purposes. Also, when looking for an installer, check they’re members of the following organisations.