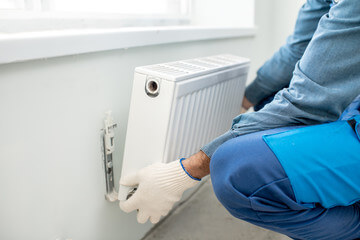 Keeping our domestic radiators in tip-top condition is essential if you want to stay warm this winter. But suppose a radiator has reached the end of its life or developed too much rust for proper operation. In that case, it’s worthwhile considering a replacement.

But, how much does replacing a radiator cost?

A new radiator costs £20-£120 depending on size, while fitting ranges from £150-£250. In the UK, a typical room will usually have only one radiator. However, large rooms might have 2-3 small radiators.  In this case, three small radiators cost £120 while the fitting costs around £450.

But, why do you want to replace them? There are two main reasons:

How Much To Replace a Radiator?

The table below outlines the type of job associated with changing a radiator and the estimated labour cost. All homes are different, and the plumber must match individual rooms with its radiator’s heat output, and ultimately with the boiler. Therefore, we cannot give definitive information on the requirements of your house; leave that to a professional after inspecting your home.

We’ve compiled the data from various online resources, so the information should be used as a guideline and a starting place for your research.

On average, radiator replacement costs mainly depend on the size of the radiator, its heat output, and how much it costs to fit a radiator (labour costs).

Additionally, the amounts shown here assume that the plumber charges an hourly rate. Furthermore, the charges reflect that he works singly except where the job requires an assistant.

Let’s have a look at each of the table entries in a bit more detail.

Suppose you have a radiator that leaks from various joints. The plumber has to remove the radiator fully to remove and replace fittings and joints. Furthermore, he will also flush the radiator’s interior to remove all traces of sludge and rust before refitting. You can also take advantage of this time to paint the wall before replacing the radiator.

The typical duration needed for taking off a radiator, repairing leaks, and replacing is around a couple of hours.

You might wish to remove the radiator altogether and cap the pipe tails. If so, this is the simplest job for a professional and takes about an hour.

Changing a radiator can be difficult if it’s large. Moreover, big radiators are heavy and awkward to carry. Therefore, most plumbers will use a labourer to assist. Furthermore, it’s common for old radiator fittings to be sized in imperial rather than metric as a new one would be. Both these problems put up the price.

On average, a professional takes around two hours for this job.

This job is similar to replacing a large radiator. Double panel radiators use twice the amount of metal compared to a single panel. Therefore, it’s twice as heavy.

Although replacing a small one might be easy to do, it will certainly be more difficult to lift if it’s a large double panelled radiator.

A typical plumber will require help from a labourer to do this. Therefore, the price increases because of additional wages. Typically, the time taken when fitting a radiator of this type will be around 1-2 hours.

Moving a radiator will cost more than removing, cleaning, and replacing a radiator in the same place. The plumber must cap the existing pipe tails. And install suitable pipework at the new location. Depending on the location of the new radiator, you might be able to use the current pipe circuit. Alternatively, you might need entirely new pipes.

Typically, moving a radiator takes around 2 hours, depending on the complexity of the new installation.

Many factors affect the cost of replacing a radiator. So, it’s a good idea to find out what makes some jobs more affordable than others.

Although both these factors are linked, you should treat them separately.

Heat capacity in the UK is measured in kilowatts (kW), although traditionally, the units were British Thermal Units (BTU). You will still find old radiators measured in BTU, in old houses (and indeed old plumbers using these units). Therefore, it’s useful to know how to convert one unit to another.  One Watt of heat is equivalent to 3.41BTU (1W=3.41BTU).

Generally, radiators with a high heat capacity value cost more than those with a low capacity.

However, you can’t go and buy radiators regardless of size. Instead, a professional heating engineer or plumber must calculate the optimum radiator size and match this with the room’s volume and the boiler’s output. Once everything matches, you can buy the correct size radiator for the room without wasting money on your heating bills unnecessarily.

Standard style radiators are the cheapest you can buy. Prices for this type of radiator, supply only, will range from £20 to £120.

However, there are other radiator types on the market:

Adding or replacing a radiator

If your budget is tight, try to flush and replace existing radiators rather than fit new ones. Then, you won’t have to fork out the cost of a new radiator, and the labour rates will be much less too.

Remember, only heating engineers have the qualifications to work on boilers and gas pipes. In contrast, a plumber can only add and change central heating pipes and radiators.

Thermostatic Radiator Valves (TRVs) fit on each radiator to regulate the hot water flow. Each TRV can be set to govern the local temperature of water in each radiator. Suppose the main thermostat is somewhere, such as in the hall or lounge. In this case, the other rooms will suffer accordingly. It’s much better to set the temperature for each room by adjusting the TRV rather than rely on the main thermostat. You have better temperature control and save money on the heating bill.

Over time, the pipes and radiators of a central heating system corrode, forming a sludge that travels around the pipes and collects mainly in radiators. This sludge causes blockages and restricts the hot water flow, reducing the efficiency of the system.

The solution is to flush chemically treated water around the circuit at high pressure to remove all impurities. A qualified plumber has the training and experience to handle corrosive chemicals working at high pressures, so don’t try this if you’re an amateur.

Typically, a power flush costs £300-£700 depending on the number of radiators in the circuit and how much sludge is present.

How To Install a Radiator

As we’ve already said, every home is different, so every central heating circuit is different. Unless you’re an experienced professional and know how to design a central heating system, you shouldn’t attempt adding a radiator. The number of radiators and their heat output must match the size of your room and the boiler. It’s much easier and quicker to hire a professional to do the job.

However, it’s useful to know what the job entails.

How to Remove a Radiator Permanently

Until now, we’ve talked about replacing a radiator. But what additional work must you do to remove a radiator permanently?

Usually, most radiators can operate happily for years without any more maintenance than removing the air in the system by bleeding each radiator in turn.

But, you should regularly inspect the radiators for problems. It’s better to fix issues before they go disastrously wrong and the floor gets covered with dirty sludgy water. Here are a few of the commonest problems to look out for.

Most radiators make no noise at all, but it’s quite common for some types to gurgle now and again. If your pipes are the quiet type, then listen out for noises that you can’t explain. Similarly, if your pipes regularly make sounds, listen for louder noises that you haven’t heard before. The unusual sound might be a sign that the radiators need attention from a professional.

Are your radiators taking a long time to warm up, and bleeding doesn’t seem to help? This situation might signify that you have restricted flow because of sludge or, even worse, you might have problems with your boiler or central heating pump. Whichever is the cause, you must call in a heating engineer to determine the problem.

Have you seen small puddles or small droplets of water appearing around the radiators? Alternatively, if an upstairs radiator leaks, you might see damp patches on the downstairs ceiling. Keep an eye out for these, and don’t let them worsen because a small leak always turns into a big one. Call a plumber straight away.

If you’re having a new boiler fitted, it’s often worthwhile to consider changing the radiators too. Radiators have a finite lifespan, so it’s better to pre-empt any problems by buying new ones.

Bleeding radiators too much

Usually, you won’t need to bleed the air from a central heating system more than once a year. So, if you find you have to do this more often than that, it’s time to call in a plumber for an inspection. They will tell whether this is a problem caused by sludge or whether you need some new radiators.

Keep an eye open for changes in your fuel and water bills. If you start to use more water than normal, you might have a leak somewhere. Similarly, increases in fuel bills without a corresponding increase in heat might mean that the radiators are becoming full of sludge and need either a power flush or replacement.

Can you replace a radiator yourself?

Yes, you can. But, if you haven’t any experience with plumbing or central heating systems, do not attempt it. Many things can go wrong, such as when tightening valves and adapters, it’s easy to pull too hard on the wrench. This might either strip the thread or break a joint. Similarly, if the system has some old soldered joints, they can easily crack, causing a leak. These and many other things might go wrong, so hire a professional.

Is it worth replacing old radiators?

Definitely! Over time, the metal components in your central heating system corrode, and rust particles break off. The rust then accumulates in the radiators to restrict the water flowrate or returns to the boiler, where it causes lots of expensive damage.  Furthermore, old radiators start to crack and form micro-fissures in the metal, which, if left, can cause leaks. It’s much better to replace them before this happens.

Should I replace 40-year-old radiators?

Should I replace a single radiator with a double?

Not necessarily. Ask a qualified heating engineer to calculate the expected heat output for the existing radiator and whether it matches the room’s volume. Also, you need to know whether the boiler can supply a double radiator rather than a single one in that location. Nowadays, it’s common practice to install a boiler with more than enough capacity. But, this wasn’t necessarily the case in the past.

So, if all the calculations work out favourably, book your heating engineer to come and fit one for you.

Are old radiators better than new ones?

No. Mostly, a new radiator will be far superior. This can be for many reasons, but the most important are:

If I remove a radiator, will the rest of the circuit work?

If you remove a radiator, it will cause no problem at all. Consider what’s happening; it’s a similar situation to turning off a radiator in a room you never use. However, when you’ve removed the radiator, cap the pipes and try to hide them under the floor so that no one accidentally damages them.

Find a Pro In Your Area

Okay, you’ve decided that it’s time to replace one, two, or all your old radiators in your home. Unfortunately, you don’t know where to start looking for help. Don’t worry. Complete the form on this page, and you’ll receive up to four quotes detailing radiator replacement costs from qualified plumbers or heating engineers near you.